A festival for the eyes 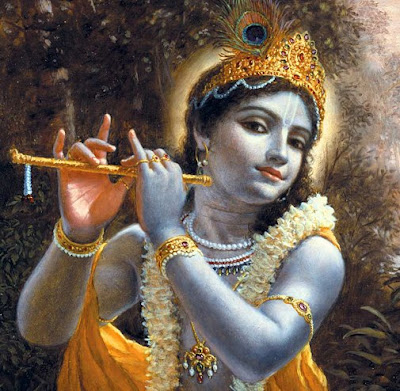 The Supreme Personality of Godhead has a cheerful, lotuslike countenance with ruddy eyes like the interior of a lotus and a swarthy body like the petals of a blue lotus. He bears a conch, discus and mace in three of His hands.
His loins are covered by a shining cloth, yellowish like the filaments of a lotus. On His breast He bears the mark of Śrīvatsa, a curl of white hair. The brilliant Kaustubha gem is suspended from His neck.
He also wears around His neck a garland of attractive sylvan flowers, and a swarm of bees, intoxicated by its delicious fragrance, hums about the garland. He is further superbly adorned with a pearl necklace, a crown and pairs of armlets, bracelets and anklets.
His loins and hips encircled by a girdle, He stands on the lotus of His devotee's heart. He is most charming to look at, and His serene aspect gladdens the eyes and souls of the devotees who behold Him.
SB 3.28.13-16
Posted by Syamesvari at 9:03 AM