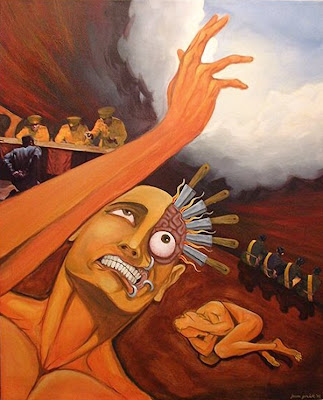 Jayadeva prabhu sent me the final version of the painting I used in my migraine post, suggesting that I could replace the unfinished version with the finished painting.
I think its such a great painting, that anyone who's ever had a migraine could relate to, so I thought it deserved a post of its own. Here's what he says about it :
It's a rather symbolic image. The four people on the right symbolizes the people that don't suffer from migraines and that are ignorant to the intense pain and suffering caused by them (hence they have their backs turned to the man curled up on the ground).
The man curled up on the ground in the fetal position obviously represents someone suffering from a migraine attack.
The collage image on the left with the men/soldiers pointing at the prisoner sitting in front of them represents the demigods or material laws of nature sentencing or punishing the prisoner.
The idea is that we are prisoners to the material energy and our karma and at any moment we can be "sentenced" to have to suffer in some terrible way (this way just happening to be through a migraine).
The figure in the foreground is obviously experiencing the pain of a migraine, with stabbing knives into the side of the head. The hooks or rings pulling the mouth open relate to the sensation I used to get of numbness in my lips and gums (for some reason I don't feel that kind of numbness any more when I get them). The figure is reaching his hand towards the blue sky, hoping for relief and salvation from his pain.
The reddish-orange and brown tones symbolize these feelings of pain and intensity of despair and suffering. This painting is actually titled, "Isolation, Torture, Hope".
Thank you prabhu!!
Posted by Syamesvari at 8:21 AM