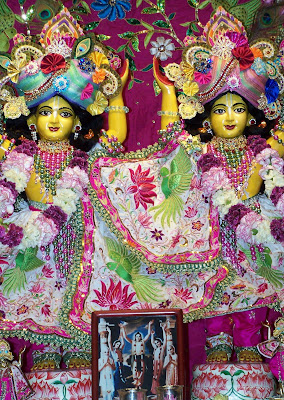 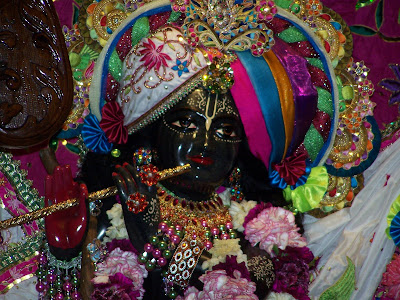 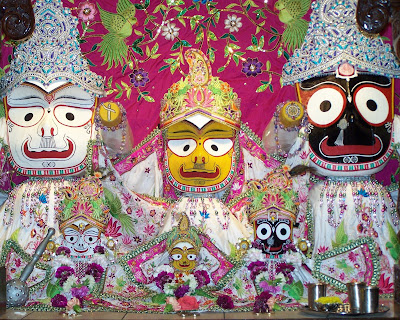 I just realised that despite being here for two full years, this is my very first post about the deities in Toronto. Admittedly when I arrived here I expected to feel some kind of instant connection to the deities...I felt that way in South Africa with Radha-Radhanath, Nitai-Gaurahari in Lenasia, Krsna-Balarama and Radhe-Shyam in Vrindavana. Instead, upon my first darshan of the deities I felt nothing . Well, perhaps thats an exaggeration! I knew it was Krsna and so I felt respectful. But that was about it.
Then I travelled to Detroit and Montreal and, especially in Montreal, found myself deeply attracted and attached to those deities. And my lack of feeling for Radha Ksiracora-Gopinath began to bug me - to the point where I wrote to my Guru Maharaja, freaking out a little bit. He explained that its natural to be more attracted to certain deities, but if I were to do some personal service for Them then my attachment to Them would grow.
Living in Kitchener and now Milton hasn't quite allowed any kind of regular deity service, but in these two years I've been fortunate enough to be involved in Bhaktimarga Swami's dramas. And even though it wasn't personal service - I was not preparing an offering for the Lord, or setting Their jewellery, or even wiping the altar floor - but it was still service that I did for Their pleasure.
And somewhere along the line, I lost my heart to Them. Perhaps it was the long, tiring hours of rehearsals where Their darshan, and knowing that it was for Them that we worked so long and so hard, were the two things that kept me going; or maybe it was on a quiet day, chanting japa before Their beautiful forms. I don't know when it happened...I'm just glad that it did.
This Gopinath is not just a sweet-rice thief, he is a stealer of hearts. If you're lucky, He will steal your heart immediately. Or it may take longer. But one way or the other, without even realising it, He will definitely steal your heart.
Posted by Syamesvari at 12:22 AM