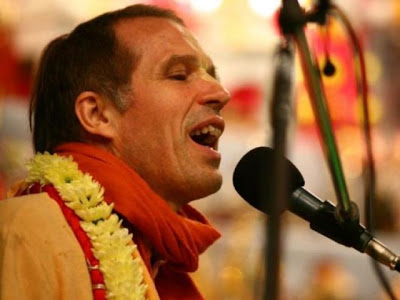 Happy New Year!
As 2009 turned into 2010 last year, my life had been irreversibly altered. I held a tiny 12 day old baby in my arms. All the time and energy I devoted to myself turned into energy I devoted, almost completely, to her.
And now, as 2010 turned into 2011, I have a little toddler - energetic and untiring in her endeavours to learn everything she can as she explores the world in she lives. Combine that with being in school, trying to complete my BCom degree, and be a devotee...well, I've felt myself spread a little thin.
Most of my time and energy is devoted to my daughter - and that is a service I am so, so happy to have; the chance to bring up a little Vaisnavi and teach her everything I can about Krsna, and being a vaisnava (although, as it happens, she is the one who teaches me a whole lot of things on that topic!)
But my spiritual life has taken a back seat and for the longest time I have felt disconnected from Krsna. I know that it comes with the territory of being a new mom - but it's disheartening nonetheless.

And so as 2010 neared it's end, I read the wonderful resolutions of friends around the world on Facebook - resolutions designed to increase their devotion, to live more Krsna-conscious lives and to give Krsna to as many people as they could - I admired, and admittedly, envied them. Where was my resolution that would bring me closer to Krsna? I didn't even feel motivated to make a resoultion! Instead, I felt...hopeless. When you feel disconnected and unmotivated for long enough, well, you tend to give up a little - you start to feel like maybe Krsna is beyond your reach and may have actually forgotten about you.
I've felt so scattered over the past year - moving from Canada to South Africa, spending some time in New York, back to SA and finally returning to Canada a few weeks ago; combine that with caring for a baby, spending as much time as I can with my family and studying for exams and the result: My relationship with Krsna had begun to feel a little superficial and habitual.

And then this morning, I came across this wonderful e-mail written by HH Sacinandana Swami. It is truly a message of hope:

With More Strength than a Million Suns ....
A New Year's Message of Hope

Night is falling quickly this winter evening, and it is snowing again. I am sitting in our little Gaura Bhavan Ashram, on the shore of Lake Wannensee, and thinking about each of you whom I met during the past year. I want to send you a message of hope - realistic hope.

Throughout my pilgrimage to Vrindavan, India, a sweet realization entered my awareness again and again. That is, Krishna is unlimitedly merciful. We simply need to be willing to accept His mercy and turn to Him.

The problem is, though, that often His mercy is not easy for us to recognize, and that's especially true when we're overburdened by challenging life situations or plain, old doubts. I learned something about doubt on this trip to India, because while sitting under a tree at Govinda-kunda I met one practitioner of bhakti who expressed his doubt to me. He said, "I have been practicing bhakti-yoga now for more than ten years, but I cannot even control my agitated and self-centered mind what to speak of develop love for Krishna. There seems to be obstacles on my path as tall as the Himalayan Mountains, and both the darkness of material consciousness and the general atmosphere of Kali-yuga are overwhelming. On some days I feel hopeless."

Fortunately, I was well equipped to answer his doubt since just that morning I found a message of hope in the eighteenth chapter (text 56) of the Bhagavad-gita. There Krishna says, "Under My protection My devotee reaches
My eternal abode."

Srila Prabhupada writes in his purport to this verse: "To a devotee who is engaged in Krishna consciousness, the Lord is very, very kind. In spite of all difficulties, he is eventually placed in the transcendental abode, or Krishnaloka."

And two verses later, Krishna emphatically declares: "If you become conscious of Me, you will pass over all obstacles of conditioned life by My grace."

Please note: It is not by our own strength that we can conquer the darkness
that surrounds us but by the strength of Krishna, which is more powerful than the power of one million suns.


Coming to the Turning Point

Srila Krishnadasa Kaviraja Gosvami expresses the same point in this famous verse from the Chaitanya-charitamrita, (Madhya-lila 22.33): "One is immediately freed from the clutches of maya if he seriously and sincerely says, 'My dear Lord Krishna, although I have forgotten You for so many long years in the material world, today I am surrendering unto You. I am Your sincere and serious servant. Please engage me in Your service.'"

So it seems the only requirement for being accepted and protected by Krishna is that one comes to the turning point and sincerely surrenders to Krishna,
renouncing all other shelters.

Someone who has found Krishna's shelter is not inconvenienced by adverse circumstances. The Sanskrit word ashraya, or shelter, comes from the root
word sri, which means "to be brilliant and dazzling." For a devotee who surrenders to Krishna's direction the cloud of anxiety enveloping an unsurrendered soul lifts, and he begins to shine with Krishna conscious
happiness. Krishna has personally fortified and empowered such a devotee
with His own spiritual energy - more brilliant than the sun. Srila Prabhupada writes: "The foolish cannot understand this great freedom from
anxiety."

Another feature in the life of a devotee who has given himself into
Krishna's hands is that he is not so easily exhausted. When I visited Srila
Prabhupada in 1974 in his room in Germany, he gave me several personal
instructions, one of which was to become a water-carrier. I used to wonder
exactly what he meant by that until one day I came upon an old well in
Serbia and watched how it served many people. I remembered my spiritual
master's instruction and then wrote this small poem:

An old well gave water to all -
the young, the old, the happy, the sad -
every day without hesitation or delay.

When I first came to him thirsty, I was amazed:
Did giving water again and again
not exhaust him?
So I decided to ask.
"No problem," he said, "I am only the well,
not the spring, which supplies me
as long as the connection is there."

Let's live like the well -
live in the higher connection.
You will be happy to pass on
what the source gives you,
never to be exhausted.

Why am I writing this? Simply to encourage you. There is good reason to be hopeful. Krishna is very, very kind to and supportive of His devotees. He waits patiently for them to turn to Him, and then He responds immediately. Often He Himself takes the first step toward them. "He is so kind, so very
kind," as Srila Prabhupada used to say.

We have only to accept that Krishna's kindness follows His own mind and not
always our expectations. This means He gives us exactly what we need at any
given time.

So now my question these days is, How can I live in relationship with Him? As I ponder this question I look out at the winter night. The stars blink in the distance. Is the Lord as far away as those stars or is He closer? How can I connect with Him?

During the last year I learned some things that help me make that connection. I'd like to share them with you:

1. Become aware that Krishna is the goal of your life.
2. Offer as many acts as you can in His service. Activate your relationship with Him and ask for guidance how to further activate it from those who have
an active relationship with Him, like Srila Prabhupada and your other
spiritual masters.
3. Train your mind to connect with Krishna through devotional thoughts. Convince your intelligence of the truth of Krishna consciousness.
4. Take full and unreserved shelter in the processes of bhakti - the hearing and chanting and reading the scriptures under the guidance of great
devotees.
5. Most importantly, pray, pray, pray. Bring your spiritual heart into your prayer.
Pray like the bird who sits in the nest waiting fervently for its mother to bring it food.
Pray like the thirsty calf who tugs at the rope binding it to a stake so it can run forward to its mother's udder.
Pray like the morose wife who yearns for her husband when he is away from home.

You will soon find that Krishna is only a prayer away. He is not like the stars in the winter sky, which are distant, cold, and unapproachable. When you reach Him in devotion, Krishna will respond to you in ways beyond your boldest imagination. Yes, the Lord is only a prayer away!

In Love With Krishna said...

Hi!
i just found your blog by chance, and i am totally in love with this article.
it is true that we feel disconnected at times.
But, He is great enough to hold us close to Him, in the embrace of His love.
May He bless us to forever serve Him with devotion, and His devotees with full-heartedness :)

Thanks for this. I want to pass it on also. My experience is that, even when one feels disconnected from Krishna, he is still thinking of Krishna. Just that connection, that remembrance... that thought can be a source of never ending transcendental bliss.