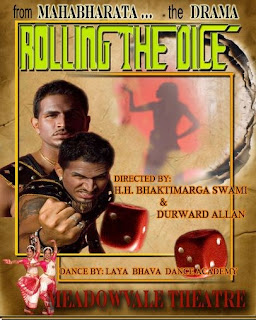 My life has been consumed by rolling dice...and no, not because I've taken up gambling. For many weeks now HH Bhakti marga Swami (renowned in ISKCON for his awesome dramas and of course his walk across Canada) has been working with a cast of about 15 or so on a drama entitled 'Rolling the Dice' depicting a gambling match between the Pandavas and the Kauravas.

This drama was done in Toronto and the South Africa, where I first saw it, and now again in Toronto...only bigger, MUCH BIGGER, and better. This time around, we're doing it in a professional thatre with a professional actor and director on board.

Its always a wonderful experience working with Maharaj - his focus on pleasing Srila Prabhupada has kept us all steady and focussed.
I've worked on dramas with Maharaj over the past 7 years, but only ever in South Africa. Being here, I've met so many interesting and wonderful devotees who have dedicated alot of time and energy (despite full time jobs) to be a part of this drama.

The devotees are literally from around the world - Cuba, Guyana, Gujerat, Russia, South India, Canada and of course, South Africa :) And they're so talented in so many different ways...

Yamuna Jivana is an amazing artist, make-up and otherwise; Raghubir is a martial arts expert, having trained for some time in Japan, Praveen has had many years on stage, as well as a few stints on TV; Adrian Ishmael also comes with an intriguing style of martial arts training, Krsnacandra has done ballet for 9 years, Savyasacin has been on stage since he was a little kid; ...and know that most of these people are accountants, yoga instructors, software programmers, project managers, authors and students by day. I've never been more impressed!

So its great, and humbling, to be working with so much talent, both on and off the screen. But more than that, it is inspiring how these talented people have all come together to serve Krsna and please Srila Prabhupada.

"These kinds of dramas about Krishna,Krishna's pastimes, and also Lord Chaitanya's pastimes, are very much desirable for presenting to the public widely."
Letter to Nayanabhirama, September 18, 1972 Los Angeles