The moon and the water... 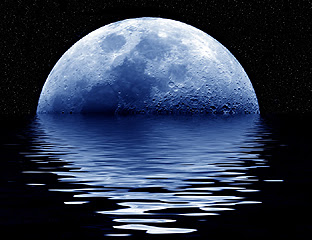 It is so easy to become disturbed or unhappy in the material world. We become attached to so many different things and become disturbed in our intense efforts to hold onto or maintain them, or become unhappy in the event that we have to let them go.
I was thinking about that for the past few days - how easy it is to have our lives and consciousness determined by emotions such as lust, greed, anger, envy and illusion. I think of Srila Prabhupada's gravity and steadfastness and his ability to NOT attach himslef to anything.
I want to just 'chant and be happy', but something keeps getting in the way...

While going through the Bhagavatam last night, I came across this verse...it was one of those light-bulb moments...or what Oprah would call an "AHA!" moment.

'The Supreme Soul, the Personality of Godhead, is compared to the moon in the sky, and the living entities are compared to the reflection of the moon on water. The moon in the sky is fixed and does not appear to quiver like the moon on the water. Actually, like the original moon in the sky, the moon reflected on the water should also not quiver, but because of being associated with water, the reflection appears to be quivering, although in actual fact the moon is fixed. The water moves, but the moon does not move. Similarly, the living entities appear to be tainted by material qualities like illusion, lamentation and miseries, although in the pure soul such qualities are completely absent.' [SB 3.7.11]

So thats whats been getting in the way...I keep identifying with myself as the body, keep prioritising things that are importanat for my body. And thats where the problem lies (of course I have a heap load of anarthas to work through, but I figure this is a good place to start.)
Ok, so I'm not the body, I'm spirit soul, eternal servant of Krsna. Right. Hmmm...problem is I've known that since I was 2, and I've still had a hell of a time in this material world. While that verse put things into perspective, it was the next verse that provided the real answer:

sa vai nivṛtti-dharmeṇa
vāsudevānukampayā
bhagavad-bhakti-yogena
tirodhatte śanair iha
"But that misconception of self-identity can be diminished gradually by the mercy of the Personality of Godhead, Vasudeva, through the process of devotional service in detachment."

"The quivering quality of material existence, which comes from identification with matter or from thinking oneself, under the material influence of philosophical speculation, to be God, can be eradicated by devotional service to the Lord, by the mercy of the Personality of Godhead, Vāsudeva. As discussed in the First Canto, because the application of devotional service to Lord Vāsudeva invites pure knowledge, it quickly detaches one from the material conception of life and thus revives one's normal condition of spiritual existence, even in this life, and frees one from the material winds which cause one to quiver. Only knowledge in devotional service can elevate one towards the path of liberation. The development of knowledge for the purpose of knowing everything, without rendering devotional service, is considered fruitless labor, and one cannot get the desired result by such labor of love. Lord Vāsudeva is pleased by devotional service only, and thus His mercy is realized by association with pure devotees of the Lord. Pure devotees of the Lord are transcendental to all material desires, including the desire for the results of fruitive activities and philosophical speculation. If one wants to acquire the mercy of the Lord, he has to associate with pure devotees. Such association alone can, by degrees, release one from the quivering elements."

I've found that it is amazing how Krsna sends you the kind of inspiration you need, when you need it the most. For some time now, I've been praying for something to give my spiritual life a bit of a kick start. After concentrating on exams for so long, devotional service took a back seat. And as it took a back seat, more and more mundane things became more and more important. I'm not saying that reading this verse has suddenly made me realise fully that I am not this material body, not at all. But it has made me realise what I need to work on and has inspired me to re-commit to devotional service.

All glories to Srimad Bhagavatam!
Posted by Syamesvari at 2:32 PM

whatever we want to have, we can not have, because our desire to grab is based on the assumption of duality, and with ourselves, we are nothing and can do nothing.by being the humble servant, we become nothing and then everything. Because nothing is the mother of everything.