The old young me

I long to be the girl I used to be...the old, young me 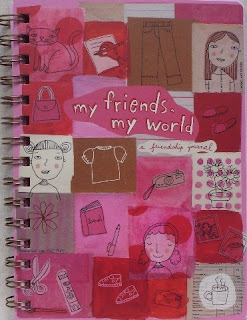 I've kept a journal since I was 14. I loved the therapeutic qualities it offered. A friend who shared none of your secrets, but offered you advice and guidance in a gentle non-intrusive way. Every detail of my life is recoreded in about 7 different books. And every now and then, the desire to look back would wash over me and I'd reach for an old journal. Finding my old journals at home was like reconnecting with an old friend. It was amusing in a 'God-I-was-so-immature-I-can't-believe-i-thought-that-way' kinda way; cringe-worthy in a 'oh-GOD-I-can't-believe-i-thought-that-way' kinda way and inspiring in a 'god-i-wish-i-still-thought-that-way' kinda way. (Thats a sentence with way too many ways!)
I read a journal from 2003, at a point in my life when i was chanting 32 rounds - "Something just hit me so hard - can you imagine that exact moment when you go back to the spiritual world and see Radhe-Shyam face-to-face? How amazing that must be! To see Their faces, see how They walk, hear Their voices...That just makes me want to chant and chant and chant and just get there!"
That inspired me...the person that I was and the way I used to think, inspired me. I want to chant extra rounds again, like I was doing back then, instead of struggling to get just get through 16. I want to be thinking long-term about my spiritual life again. Reading that, looking into the past at a fresh, excited, spiritually enlived me has inspired me!!

Resolution: Think like the old me and write more and more so that I can keep me going and in check in the future! 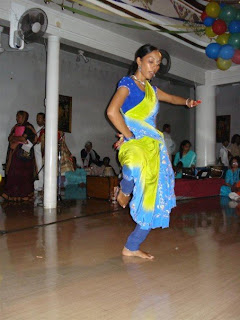 I loved dancing. I still do. But I did it a whole lot more when I was younger and with a whole lot more passion. Whether it meant going to Kathak and Bharatnatyam dance classes; dancing in Bhaktimarga Swamis dramas or special events; or just turning the stereo on and letting loose...It was what I loved doing most. It was when I felt the most alive; that I was doing something that I not just loved, but was actually half-way good at.
I remember dancing at a benefit concert in South Africa hosted by Bhakti Caru Swami. It was an evening of drama and classical music by some Indian musicians Maharaj had brought down. Afterwards the tabla player, an elderly gentleman said to me that it was one of the best dances he had ever seen. Now THAT meant something. I don't necessarily agree with him, mind you - but it inspired me.

Resolution: Dance like no ones watching!! Also - go back to Kathak classes!! 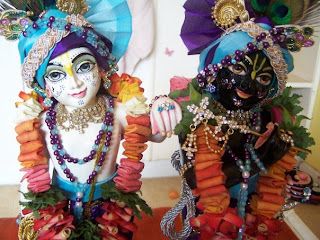 I remember visiting Vrindavana some years ago during Kartik, knowing that I would return to South Africa with my very own Krsna-Balaram deities. It was the realisation of one of my oldest, strongest desires.
My grandparents took my cousin and I to Vrindavana for the first time when we 11 years old and non-devotees. It was Kartik and anyone who's ever been there during Kartik knows that, while Vrindavana is a transcendentally special place all year round, there is just something that makes it even more special. Everything in Vrindavana was overwhelming and so utterly charming - the parrots at sunset; the cows mooing in the distance; the peacocks crying at dawn; the bells ringing in the evening, and just the presence of beautiful Radhe-Shyam and Krsna Balarama. I lost my heart in Vrindavana (and no its not a cliche), but I specifically lost it to Krsna-Balarama who I fell in love with the moment that I saw Them. It was there that I first chanted Hare Krsna, wore a sari and did some devotional service. Cutting the wicks for the Damodarastakam lamps - that was the first piece of devotional service I ever rendered. And with a knife, not scissors mind you. Lots of blisters after.) So Vrindavana, and Krsna Balarama, are very significant and special to me.
So when They kindly allowed me to take care of Them, it was a major, major moment in my life. Having Them in my home, to be able to see Them and serve Them every single day was so, so amazing. They were my direct link with Vrindavana.
But as time has passed, I've gotten busier and let other things take priority over serving Them. I want to serve Them again like I did when I was younger - with the love and appreciation They deserve.

So I realise that as life goes on change is inevitable. I can't really be the person I was 5 years ago. Alot has happened since then that has encouraged, or forced, me to grow up. I guess in essence, I want to do the things that I enjoyed and were good for me; things I haven't outgrown but neglected. There are some areas in my spiritual life, and life in general, that need a bit of shaking up and the old young me is just the gal to do it:)