A few words from Bhaktimarga Swami 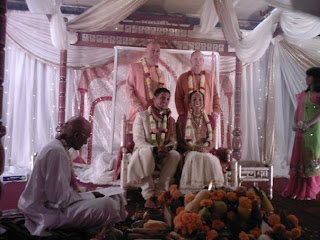 It's been a month since our wedding in South Africa.The days before, the actual day and the few days after were so special. Unfortunately, due to visa issues, school, moving and travelling I haven't had the time to just sit down and write all those recollections down (or type them up in this case).

I thought that I'd just add this little note off Bhaktimarga Swami's blog, in which he speaks about our wedding. Maharaj is a very big, important part of our lives and we felt so fortunate that he was a part of this big step that we took.

Wednesday, March 19, 2008 Durban, South Africa
Do monks get involved in weddings? In my order, yes, most certainly! In fact, my comrade Bhakti Chaityana Swami acted as the father to Syamesvari, a young woman in the local community, and formally gave her away to her new husband Savyasacin at the ceremony this evening. I also participated but in a more minimal way. As an invitee, I attended the program which recognized the mutual bond between this lovely couple. Savyasacin is from Canada and is a sincere seeker. In a short address I emphasized that such a union has less to do with romance and fantasy functions (such as the wedding ceremony) and more to do with complementing each other in personal character growth and becoming responsible human beings, of which the most important function is self-realization. Srila Prabhupada taught the central point of married life is the Supreme Force whom we identify as Krishna, the speaker of the sacred Bhagavad-gita.

We're eternally grateful that Maharaj could share this day with us, that he spoke such encouraging words and that he offers us his guidance and support. Thank you Maharaj!!