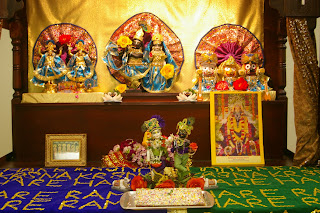 August is my favourite month. Its full of birthdays, special birthdays. My grandfather who brought me to Krsna Consciousness on the 7th; my spiritual master, Srila Bhakti Caitanya Swami on the 14th; my husband Savyasacin on the 2oth; and my two most favourite boys - Krsna and Balarama.
In 2005 I spent Balarama Purnima and Janmastami in Vrindavana. What an unforgettable experience! Nothing, NOTHING, compares to singing Vibhavari sesa in a crowded temple room on a cool Vraja morning with Krsna and Balarama right in front of you on their respective appearance days, nothing comes close to the sweetness of Aindra's kirtan during the abhisheka and really, theres nothing quite like the ecstatic 'haribol" or "Jai Jai Sri Radheeeee Syam" that goes up every time the altar is opened to reveal the deities in Their beautiful new outfits.
I was fortunate enough to be a part of a team of about 3 or 4 ladies who made Gaura Nitai's flower outfit. Its three years after the fact, and I still have the glue gun burn on my arm to remind me of that good fortune. Heres a picture of Gaura Nitai in that outfit: 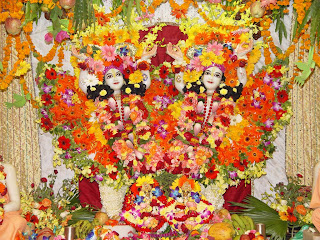 In all honesty though, as happy as I was to be engaged in that service, it was really Krsna Balarama's outfit that I wanted to work on. And when 4:00 was getting dangerously close, I was handed Krsna/Balarama's pants to cover in jasmine buds...such is Vrindavan that Krsna fulfills all your desires:) 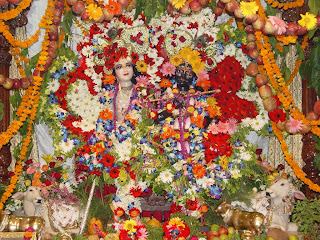 This Saturday morning, we started our day off with Vibhavari Sesa; I dressed the deities in Their Balarama purnima outfit; and we made an offering of fresh, organic blackberries, strawberries, nectarines and bananas, as well as fresh carrot, beet and cherry juice made by Savyasacin (surprisingly yummy). We made a trip to St. Jacobs that morning, predominantly a Mennonite community, where people have stalls selling everything you can imagine - the freshest veggies, the most wholesome fruit, beautiful flowers among other things...most of it grown themselves and sold at a really good price.
Its also just an interesting experience being there - just 15 minutes away from where we live, the Mennonites are simple people who don't believe in the use of modern conveniences like electricity, they dress simply - women in plain long dresses and bonnets, men in suspenders over their shirts and pants, and produce almost all of the goods they consume themselves. Its not a rare sight in St. Jacobs to see people travelling in their horses and carriages. Its a pleasant trip back in time, where life is simple and peaceful.
Back to Dauji-Kanaiyalal, here they are: 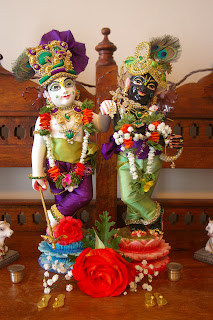 This is our new altar. Actually its a bookcase we got at a really cool furniture store on Yonge Street. Bhaktimarga Swami came over on Saturday and he really liked it. 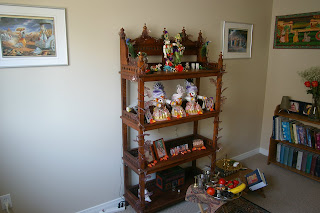 We got flower lights at IKEA (another great find for this South African) and wound them around the altar, so this is what it looks like at night...really cosy and intimate. 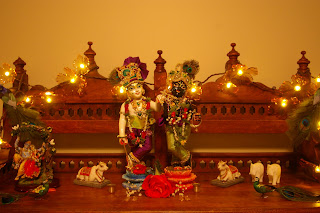 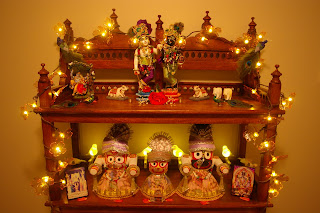 Yesterday, Dauji Kanaiyalal made their way to the Brampton temple (pictured at top) for the second part of their birthday celebrations. Since moving to Kitchener we've been going to the Brampton Temple - it lies between Kitchener and Toronto, so its much closer. While it is a smaller community of devotees, I was overwhelmed by how welcome they made us feel. The devotees really treat each other like family, and they all work hard together to make things work. We're really fortunate to be a part of that community. And of course its a bonus that there are about 7 or 8 South African devotees there:)
This is a sweet pastime from Ananda Vrindavana Campu:
"Haladhara (Balarama, the holder of the plow) looked extraordinarily elegant moving with His own group of young gopi consorts. One golden earring enticingly danced on Balarama's cheek and His eyes rolled from drinking varuni. With His dark blue caddar half falling off His camphor white chest, Baladeva looked like the white moon breaking through the darkness. For some time, Baladeva, who is a talented artist, danced to the beat of songs in carcass and dvipadika. Appearing like the personification of bliss, Balarama sang, laughed, and threw kunkuma powder on His be­loved gopis, as if sprinkling the sindura of love on their foreheads. Backed by the vina, Baladeva loudly sang a song in dvipadika. Then in a joking mood, He threw colored powders on the restless-eyed gopis. Balarama mixed with His many gopi group leaders and their companions in the same way that Krishna enjoys with His gopis like Radhika, Lalita, Candravali, Syama, and Bhadra.

Krishna meanwhile defeated the gopis' long-standing pride of their sing­ing skill by playing sweetly but indistinctly on His flute. The gopis re­sponded by surrounding Krishna and dousing Him with kunkuma while their bangles jingled joyfully. While tolerating the showers of kunkuma, Hari hung His head down submissively like the best of youthful, intoxicated elephants, and continued playing His flute song in carcari tala. As Krishna playfully moved with heroic steps, He met with Balarama who rambled about like an intoxicated elephant along with His own group of enraptured young gopis. These gopis, who were completely attached to Balarama, gazed at Him with tender eyes, conveying their affection for their beloved consort. Lifting their bangle-laden arms, they sang accord­ing to the beat and sometimes induced Balarama to sing along. While their ankle-bells tinkled in time with the nimble movements of their feet, the gopis danced beside their beloved Balarama, and threw kunkuma pow­der on His body with great delight.Understanding the hints from Krishna's glances, the cowherd boys bom­barded the gopis with red, white and yellow scented powders. Balarama's gopis ran away fearfully. Seeing their condition, Krishna smiled and mocked them by playing merrily on His flute. Krishna's gopis laughed along in sweet tones. While clapping their hands with a strong beat and bellowing "Ho! Ho! Hee! Hee!"; Krishna's friends filled the four directions with robust laugh­ter.His anger and passion enflamed, Rohininandana, roaring like a wild young bull elephant suddenly spurred to competition, chased Krishna's com­panions to defeat them with a deluge of powders. Glancing forwards and backwards like lions stalking prey, Krishna's girlfriends desired victory. But losing their intelligence, they could not decide whether to attack or to retreat, so they all ran away.
When Krishna's gopa friends counter-attacked Baladeva, He laughed as He squeezed them in His strong, snake-like arms and covered them with colorful powders. In the pleasure of playing, Krishna's cowherd boyfriends lost all sense of awe for Baladeva, as they shouted at Him with contorted faces. Being very strong, they managed to get free from Baladeva's grip. Gathering in a group, they fearlessly retaliated with a volley of vermilion flower bombs. Though defeated, Baladeva remained fearless.Krishna, bathing everyone in the glow of His soft, sweet smile, said, "What you have done is not right. I do not like it. It is ungentlemanly to gang up on My brother who is all alone."
Hearing this, all the boys calmed down. Moved by the emotions of comedy, pride and anger, Baladeva's com­plexion assumed a ruddy hue to appear like a diamond pillar embraced by red lotuses. The majestic form of Balarama shone like a huge crystal bud reflecting the red jaba flower, or like a proud pinnacle of ice touched by the pink of early dawn. Baladeva looked as elegant as a mountain of white lotuses covered by a forest of pink lotuses inhabited by cakravaka birds. He looked like a full moon anointed with vermilion, glowing in the red evening sunset. Seeing Him thus, Balarama's gopis surrounded Him and amused Him with blissful singing and dancing as they wandered off together."
Ananda Vrindavana Champu

All glories to Lord Balarama!!
Posted by Syamesvari at 8:40 AM