A fall feast...fit for a guru 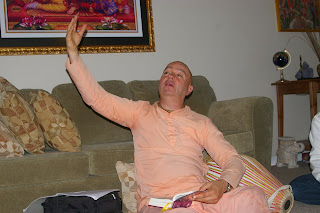 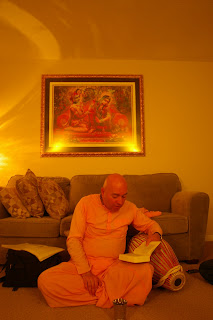 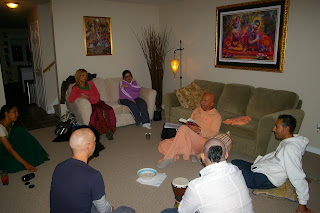 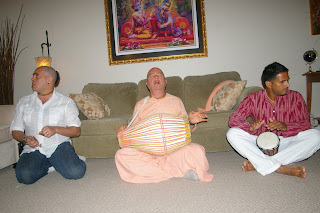 the kirtan that had our neighbour complaining... 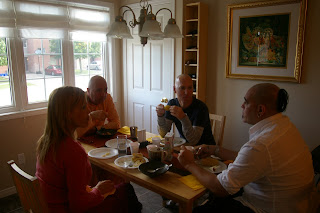 Yesterday afternoon, Bhaktimarga Swami came over to our home, along with Devadatta, Yamuna Jivana, his wife Siobhan and their lovely dog Teddy.

Since Maharaj eats sabji, rice and chapatis everyday at the temple, he thought a change would be nice. So did I...and in keeping with the season, prepared a fall feast. All of it locally grown, some of it organic.
It was also Yamuna Jivana's birthday, so a cake was definitely in order. Now, I am no baker. My last attempt (my husband's birthday cake) was hellish from start to finish - batter on the walls (it took forever to clean) and a cake that crumbled after...I even forgot it in the oven a couple of days later and it melted when I turned the oven on high grill. Right. Not very inspiring, I can promise you.
So I baked the cake the night before, lest anything disastrous occur. And it actually turned out pretty good. I am now officially inspired to do more baking.
Right back to the menu...
- 3 bean fall soup (with squash, asparagus and celery)
- herbed bread
- Tortilla triangles, filled with tofu, spinach, peppers and zucchini (an idea I stole from Remuna's
program:)
- Grilled herb potatoes, with feta
- Corn on the cob
- Green salad, with avocado, roasted pines and an orange dressing
- Banana lemon cake - with a orange, lemon, grapefruit jam mixed into the icing.
- Fresh watermelon juice (for which my husband must get the credit)
The soup was the official hit of the party. Even though I cooked enough for 10 people - Maharaj, Devadatta, Siobhan and Yamuna Jivana finished it in one sitting :) That was the ultimate compliment.
I simply have to mention that my husband was phenomenal - he stopped me freaking out which I tend to do on a regular basis when cooking for more than 4 people, stirred things when I couldn't and took care of everything outside the actual cooking. If that meal was at all a success yesterday, he can take a lot of the credit.
After lunch, we watched the 'King and I'. There was a scene Maharaja was after, to incorporate into his new drama 'The Eighth Boy', but we ended up watching the whole movie (skipping over the songs, of course). What a great movie! I'm not one for old movies, especially musicals, but this was fantastic - the sets, the costumes, the dialogue, all of it. Maharaj pointed out that it's very sattvic and Vedic in its approach.
After a rousing Kirtan, Maharaja read from Krsna book 'Charades Style' , where he acted out certain words and we had to fill them in. That was fun. Then he read some bits from his walking diary, written in Ireland.
Afterwards, we snacked on Vanilla ice-cream with fresh blackberries and strawberry sauce. And I have to mention Madan-Mohan prabhu's almond cookies which were soooo addictive, we munched on them all through class.
Maharaj arrived just after 3 and it was nearly 10 by the time he left. Despite having gone to bed at one that morning, being on our feet all day, and exhausted by the time he left - it was totally worth it. The exhaustion, aching feet, cuts and burns - all of it. Its such a great blessing to have the association of such saintly persons in our home, and to be able to serve them.
Maharaj is so comfortable to be with, he relates everything to Krsna, makes everyone feel so welcome and inspires us in our service with the dramas.
And so it will be a pleasure, and an honor, to celebrate his Vyasa Puja tomorrow. And in true Bhaktimarga Swami style, he will be walking from the Toronto temple, leaving just after the mangal arati, to the Brampton temple, 24 km's away, where his actual Vyasa Puja will be held. So, if you're around, come take a walk with the walking monk.
Posted by Syamesvari at 8:32 AM

i know the routine well..the one where the husband intervenes with the wife's cooking freak-out!! lol

:) I KNEW having a husband would come in handy!