This Saturday, on February 14th, I celebrated my 24th birthday. Savyasacin planned a trip to Montreal, and I have to say, it was the perfect place to start off a new year.

When I turned 15, Bhakti Caitanya Swami said to me, "Use your birthday as a stepping stone in your Krsna Consciousness." Since then, my birthday has become my new year, a time when I reflect on what has been and what needs to be.

I realise that 24 is not all that old, but since I was a child, somehow 24 signalled that you were officially a grown up. 18 just meant you could drive and 21 meant you could get into certain clubs. 22 and 23 were practice runs for adulthood, and by 24 you should already have the grown-up business down - maturity, wisdom, responsibility and all the other things that come along with being an adult.

24 feels like ages away from 23. Perhaps it's because I got married last year, just after my birthday, and so much has changed in the space of one year. I have changed so much. In this last year and a half, I have dealt with my own set of issues - moving to a new country and dealing with those repercussions, being away from home and my family, the temple in Durban, my friends, Bhakti Caitanya Swami and everything that I was comfortable with. But I've also grown into a relationship that has healed a lot of old wounds, and allowed me to come out of the shell I always thought I was in.
And so, while I'm not sure that I have all the qualities of an adult, 24 has come to mean being more carefree, more playful, more light-hearted and more relaxed. I used to be chronically tightly wound. But learning to deal with all my old issues (thanks to my husband), I've taken a more laid-back, 'its-in-Krsna's hands' approach.

For a few days before, I tried to think of what I wanted 24 to be about. I wanted to use my birthday resolution as a stepping stone in my Krsna consciousness, but I also wanted to be realistic. I didn't want it to turn into a New Year resolution that lasts 3-5 days after January 1st, and then starts to lose its significance with each passing New Year, because you know you're not going to follow them anyway.

It was the morning of my birthday when we left for Montreal and I still hadn't decided. All the way there, I meditated on it. We arrived in Montreal. Still nothing.

Montreal is a beautiful, beautiful city, rich in history and culture, with a charming personality and a warm, welcoming embrace. It doesn't matter whether you're there in the summertime, or in the icy clutches of its snow laden winter, Montreal will always make you feel like there's no other place you'd rather live in.

There's a church around every corner. Over 400 to be more exact. Said Mark Twain, "This is the first time I was ever in a city where you couldn't throw a brick without breaking a church window." And they are all exquisite churches, inside and out.

Below is the interior of the Notre Dame Basilica, founded in 1642, when Montreal was just a village named Ville-Marie, the City of Mary. 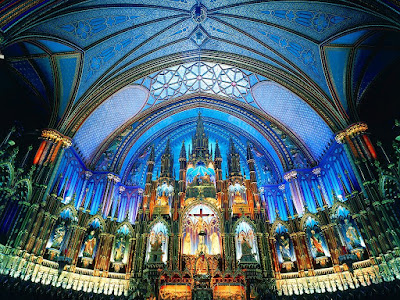 Montreal is littered with cafes and restaurants, quaint and modern, and coupled with the sound of French being spoken and 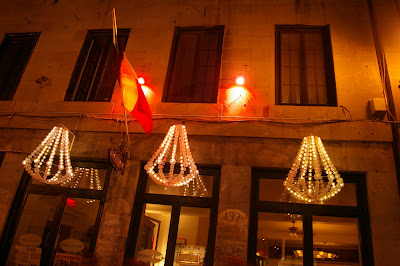 the low rise, equally quaint buildings, you can't help but feel that you're no longer in Canada, but in Europe, Paris perhaps. 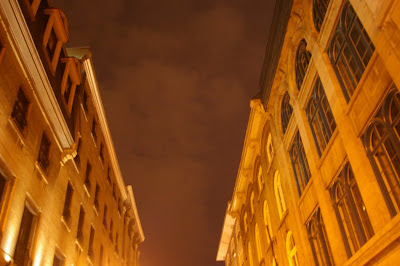 Photos by Savyasacin
My resolution inspiration came the next day, on Sunday evening. Not from the beautiful city itself, but from the treasure it houses on 1626 Boulevard Pie-X - Radha Manohar.
As I sat before Them, awed by not only Their height, but Their beauty, I was able to make my resolutions for 24.
1. To let go. To stop stressing and leave everything up to Krsna. And for me to be confident in the choices He makes for me, I need to invest more time and faith in Him. Which I hope to do by:
2. Being more conscientious in my spiritual life. And this extends beyond being attentive with my japa (although this is where it starts), to every other thing I do for Krsna. After so many years, little things like offering arati or doing a bhoga offering has become a habit, or an obligation. I want to be more aware when I'm doing these things, so that I feel more connected to Krsna by doing them. After all, I'm going to do Them anyway, so I may as well do Them right, with my mind on Krsna. 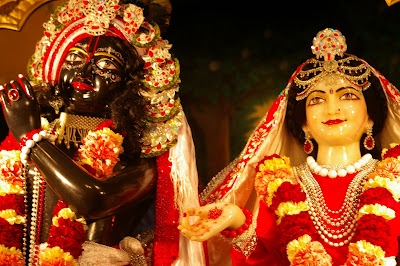 I pray that this year brings me closer and closer to Your lotus feet.
I also want to say a big, big thank you to my husband...he tolerated me when I was a nutcase at the best of times, and had the patience to deal with my spiritual and material issues. The time and effort he puts into his own spiritual life, as well as mine, has made me a more whole person and left me with the inspiration to be a better devotee.
My life may have changed, but it has definitely changed for the better.
Maybe I have grown up after all.
Posted by Syamesvari at 10:01 AM