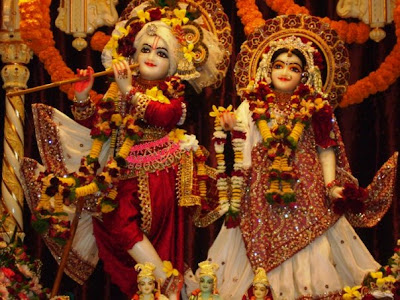 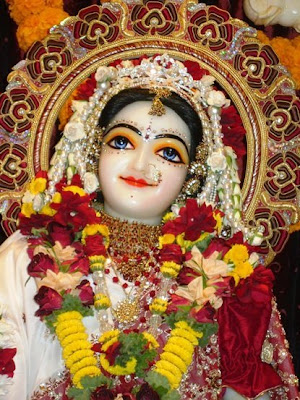 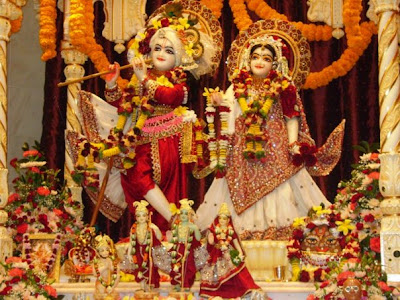 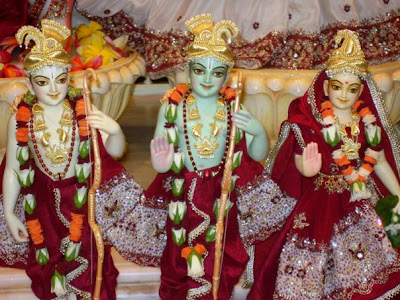 I know, I know...I no longer live in South Africa. Still, I couldn't pass up this opportunity to share the beautiful darshan of Sri Sri Radha-Radhanth and the new deities - Sita, Rama, Laxmana and Hanumana.
Aren't They just lovely??
"To keep the promise of His father intact, Lord Ramacandra immediately gave up the position of king and, accompanied by His wife, mother Sita, wandered from one forest to another on His lotus feet, which were so delicate that they were unable to bear even the touch of Sita's palms. The Lord was also accompanied by Hanuman [or by another monkey, Sugriva], king of the monkeys, and by His own younger brother Lord Laksmana, both of whom gave Him relief from the fatigue of wandering in the forest. Having cut off the nose and ears of Suparnakha, thus disfiguring her, the Lord was separated from mother Sita. He therefore became angry, moving His eyebrows and thus frightening the ocean, who then allowed the Lord to construct a bridge to cross the ocean. Subsequently, the Lord entered the kingdom of Ravana to kill him, like a fire devouring a forest. May that Supreme Lord, Ramacandra, give us all protection."
"In the arena of the sacrifice performed by Visvamitra, Lord Ramacandra, the King of Ayodhya, killed many demons, Raksasas and uncivilized men who wandered at night in the mode of darkness. May Lord Ramacandra, who killed these demons in the presence of Laksmana, be kind enough to give us protection."
~ Srimad Bhagavatam
Posted by Syamesvari at 10:53 AM