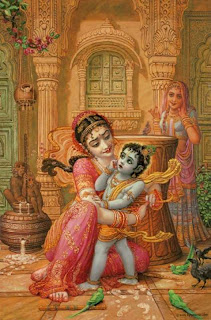 “One of the most important items of devotional service during this month is called Ürja-vrata. Ürja-vrata is observed in the month of Kartika (October-November); especially in Vrndavana, there is a specific program for temple worship of the Lord in His Damodara form. “Damodara” refers to Krsna being bound with rope by His mother, Yasoda. It is said that just as Lord Damodara is very dear to His devotees, so the month known as Damodara or Kartika is also very dear to His devotees.

It should be noted here that Srila Bhaktisiddhanta Saraswati notes that anyplace where the glories of the Lord are recited by vaisnavas is to be considered a holy dhama.
Posted by Syamesvari at 9:52 AM