To Odissi or not to Odissi...that was the question 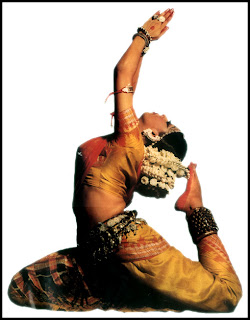 I'm celebrating the end of my exams with my first Odissi dance class :) YEY!!!!
Tomorrow is my last exam - Psychology, which I'm not particularly looking forward to. And it signals the end of one more semester...which means that I'm one semester closer to graduation and a degree...another yey!

For some time now my feet have been itching to dance again...to feel the hard wood beneath my feet, hear them thump against the floor, feel the beat of the music, feel my muscles ache occasionally...sigh...what bliss. But I wasn't sure which direction I wanted to go in - continue with Kathak, which is my first love and passion, or bharatnatyam which I enjoyed a lot less; or try something new...like Odissi.
Now some people may think that there isn't much difference between Odissi and Bharatnatyam...but there is. Odissi dancers use the tribhangi stance (like Krsna's three-fold bending form) as opposed to the straightness of bharatnatyam. Now don't get me wrong -- it doesn't make it better than bharatnatyam, just different. Then, theres the transcendental aspect of it - the fact that it was used to bring pleasure to Lord Jaganath just makes it so special. And then theres the aspect of the costumes, specifically the head piece. I read this:

"The crown, or mahkoot, worn by the Odissi dancer is made only in the devotional city of Puri in Eastern Orissa, where the great Jagganath temple is located.
It is formed from the dried reed called sola in a tradition called sola kama. The reed is carved by a series of cuts into the rode-like stem and forms various types of flowers when a string is tied in the middle of the rod and pulled tight. As the string tightens, flowers bloom into, jasmines, champa-one of the five flowers of Lord Krishna’s arrows, and kadamba -the flowers under which Radha would wait for Her beloved Lord Krishna.
The mahkoot consists of two parts. The flower decorated back piece, called the ghoba, sits around the dancer’s hair pulled into a bun at the back of the head. This piece represents the lotus with a thousand petals that lies above the head in the head chakra, or energy center. The longer piece that emerges from the center of the back piece is called the thiya and this represents the temple spire of Lord Jaganath or the flute of Lord Krishna."

Everything about Odissi - it's costume, jewellery, stance, origin - is symbolic and beautiful. And so nicely linked to Krsna. I like that.

And so it has been decided...Odissi it is!

I'm super-excited...even though I know for a fact that because its been so long since I've danced, its going to be killer on my thighs...but who cares!! Its definitely worth it...

Odissi? Yey for Syam :) so glad you're still dancing! Can't wait to see you in another drama...come back to SA!!