Laksmana! Where is my bow? 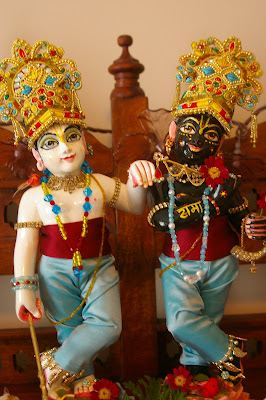 When I heard my Guru Maharaj tell this pastime in Durban some years ago, it really stuck in my mind. Of course, if you've ever heard Bhakti Caitanya Swami tell a pastime, you'll know that it's quite an experience. Indradyumna Swami once said that nobody tells a story the way Bhakti Caitanya Swami tells a story. Spellbinding and captivating, with a sprinkle of humour. And of course there is the British/New Zealand/South African accent that gives it just the right touch of charm.
The following verse is from Rupa Goswami's Padyavali. It does not mention it specifically in the text, but according to my Guru Maharaja, this verse comes from a bedtime story Mother Yasoda was telling her little boy. And as He listened, Krsna became so caught up remembering His Rama-lila that He could not help His outburst. 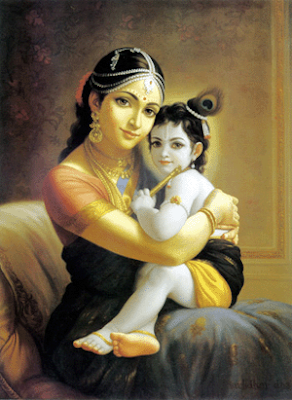 “There once was a king named Rama.”
“Yes.”
“His wife was Sita.”
“Yes.”
“On the order of His father, Rama lived in the Pancavati forest. There Ravana kidnapped Sita.”
As Lord Krishna heard His mother narrate His own activities performed in ancient times, He suddenly called out: “Lakshmana! Where is My bow? Where is My bow? Where is my bow?” I pray these alarmed words of Lord Krishna may protect you all.
Padyavali, Text 151
I really love this pastime. It is amazing how Krsna can make Himself so available to His pure devotee - to put Himself in a postion where He engages so personally and so sweetly. To think - the Supreme Personality of Godhead, slayer of demons, needs a bedtime story to help Him fall asleep! It makes Krsna so much more loveable and, well, real.
Somehow, when I think of Krsna's pastimes, I never think of anything outside '9-5', so to speak - I just think Krsna wakes up, herds the cows, kills some demons, has some pastimes with Radharani and then returns home, just so it can all begin again the next day. But this proves that so much goes on before He can even go to bed! Krsna's pastimes really are an ocean - an unlimited ocean of sweetness.
It's Diwali today and so this pastime came to mind.
More than ever I am aware that I am no longer in South Africa.
Outside of India, South Africa has one of the largest Indian populations. So Diwali is celebrated in a big way. As people prepare to welcome Rama back from His exile, and into their homes, children get new clothes, pujas are conducted in homes and temples, sweets are made and swapped amongst neighbours, family and friends; diyas adorn driveways and doorways and fireworks go off until the early hours of the morning. It's the South African Diwali tradition.
Its not quite the same in Canada. I haven't seen or heard a firework, what to speak of an actual Indian person today!
But I realised that it goes beyond the fireworks and new clothes. Krsna and Balaram are dressed in new outfits and crowns, They were offered a puja and something sweet and the diyas are burning as we speak. Now my husband and I have started a tradition of our own - one that will grow as our family does, and I am happy about that. It may have been a quieter Diwali, but it was also sweet and intimate. 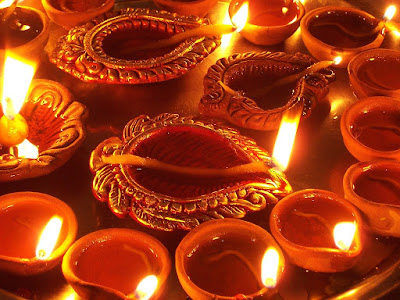 So it doesn't matter where in the world I may be, the fact is that today is the day that Rama returns from His exile, and I am able to celebrate that - not quite the same way I did when I was in South Africa or India - but I am celebrating all the same.
Welcome back Lord Rama:)
Posted by Syamesvari at 4:56 PM