May very fragrant Radha Kunda be my shelter

Today is the transcendental appearance of Radha-Kunda in the material world, known as Bahulastami. I was in Vrindavana one year and went to Radha Kunda with Deena Bandhu prabhu and his parikrama party on Bahulastami. It was crazy-hectic, jam-packed and a little overwhelming, dealing with so many thousands of people. People in India have perfected the art of pushing - although in Vraja it's forgivable, even understandable - as they're usually pushing you around in their eagerness to have darshan of their Lord. But still - for a Westerner, who's not as adept at pushing people around, especially physically, it can be a little unsettling.
But then you finally get to the banks of Radha Kunda and descend the steps to get as close to her as you can. Somewhere in the distance you hear Aindra's kirtan amongst so many other kirtans, lamps and marigolds float by on the water, the air is sweet with incense, and all is right with the world. More than right. Time stands still and it is perfect. 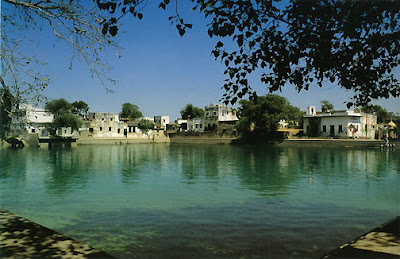 This is the desription of Radha-Kunda's appearance:

When the inhabitants of Vrindavana heard that Krishna had killed the terrible Aristasura demon (who appeared in the shape of a bull) they all rushed to the spot in a jubilant mood. Srimati Radharani and Her girlfriends also arrived at the scene and upon hearing that Krishna had killed a bull, became very upset and refused to associate with Him. Krishna pleaded with Radharani that since Aristasura was actually a demon in the disguise of a bull, there was no sin in killing him. Radharani informed Her beloved Syamasundara that in order to purify Himself from cow-killing, He would have to take His bath in all the holy places of the universe and then only would She associate with Him again. Krishna agreed to Radharani’s proposal, but instead of taking the trouble of traveling to all the holy places in the universe to take bath, Krishna informed Her that He would instead call all the holy places in the universe to Vrindavana.

Striking His heel into the ground, Krishna made a very large impression and then called all the holy places of the universe to pour their sacred waters in to the newly-made kunda.
One by one all the holy places arrived in their personified forms. Offering their prayers to Krishna they all poured their waters into the kunda and filled it up. Just to please Radharani, Krishna took His bath in the newly formed kunda that then became celebrated as Syama-kunda.

Exhibiting transcendental arrogance in having created such a beautiful pond, filled with the sacred waters of all the holy places in the universe, Krishna began teasing Radharani and the gopis. He said that because they were only simple village girls they must have never performed any religious duties in this world for the pleasure of the demigods. Krishna also informed them that because they sided with the demon Aristasura, in the form of a bull, they would have to share the sin of cow-killing, and must also take bath to purify themselves.
Feeling the pinch of Krishna’s joking words, Radharani suddenly exhibited Her transcendental anger and seeing a deep impression of Aristasura’s hoof print nearby, broke one of Her bangles and using it as a digging instrument, started to dig in the soft earth. Upon seeing this, the gopis also broke their bangles and started digging. Within a short time a large kunda had been created right next to Syama-kunda.

Krishna was amazed to see the large pond that Radharani and the gopis had created and made an offer to Radharani that the sacred waters from His kunda could also fill Hers. Radharani flatly refused Krishna’s offer, saying that the waters of Syama-kunda were now contaminated due to the sin of cow-killing. She further said that Her many girlfriends would form a line and bring pure waters of the Manasi-ganga in golden pots to fill her kunda.
Upon hearing the words of Srimati Radharani, the holy places personified approached Her with folded hands and while chanting beautiful prayers in glorification, humbly asked Her to grant them a boon. Radharani inquired what kind of boon they desired. The holy places personified informed Her that their lives could only be successful if they were allowed to pour their sacred waters into Her kunda also. Being ever compassionate to all those who sincerely approach Her, Radharani while glancing at Syamasundara through the corners of Her eyes, happily agreed to their proposal. In a joyous mood the holy places personified forcibly broke through the banks of Syama-kunda and poured their sacred waters into Radha-kunda.

Krishna then immediately took bath in Radha-kunda and declared that henceforth, anyone who with firm faith took a bath on that day in Radha-kunda, would achieve the same ecstatic love that Radharani had for Him. Radharani and Her girlfriends then took bath in Syama-kunda. Radharani declared that anyone who takes bath in Syama-kunda would achieve the same ecstatic love that Krishna has for Her.

This pastime occurred at 11:45 pm on the eighth day of the waning moon in the auspicious month of Kartika. Each year on this day, thousands of devotees flock to Radha-kunda for the ardha-ratri-snana (midnight bath). First they bathe in Syama-kunda and then again in Radha-kunda. This festival, held on the appearance day of Radha-kunda is known as Bahulastami. Radha-kunda is the only place in the world where a holy bath is taken at midnight. 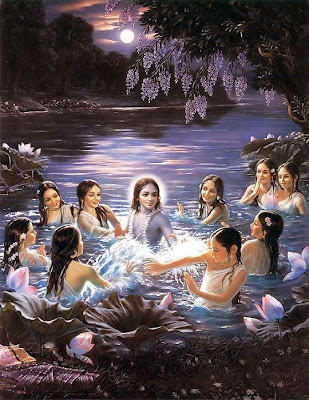 May very fragrant Radhakunda, which, prodded by the gopis' many joking words after Vrsabhasura's death, the king of Vrndavana forest happily built and filled with His own hand, be my shelter.

May very dear and fragrant Radhakunda, which for one who bathes in it immediately creates in the land of the heart a desire tree of pure love rare even among the gopi beloveds of Lord Krsna in Vraja, be my shelter.

May very dear and fragrant Radhakunda, where, yearning to attain the merciful sidelong glance of His queen, Lord Krsna, diligently follows Her bathing attendants, be my shelter.

May very fragrant Radhakunda, which is named after a girl who is a realm of love for He who is the moon of Vraja, a girl who is like the most precious jewel in the crown of the sweet girls of Vraja, be my shelter.

The mercy obtained by serving Radhakunda makes the celestial vine of pure love for the prince of Vraja, which is famous for bearing the flowers of service to my queen, sprout. May that very fragrant Radhakunda be my shelter.

May very fragrant Radhakunda, on the shores of which are many splendid and charming forest groves filled with the sweet sounds of bumblebees and each named after one of Sri Radha's friends, be my shelter.

May very fragrant Radhakunda, on the shore of which, in a pleasant courtyard Queen Radha and Her friends sweetly joke with Lord Krsna, the moon of Vraja, be my shelter.

May very fragrant Radhakunda, where the passionate divine couple daily plays with Their passionate friends in the charming lotus scented water, be my shelter.

To one who is completely dedicated to Queen Radha's service and who happily reads these eight beautiful verses describing Her lake, even in this present body Lord Krsna shows His beloved as He happily embraces Her. 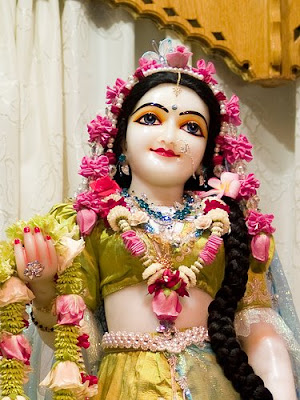 I just came across your blog, and I love your deities! Please take a look at my blog...